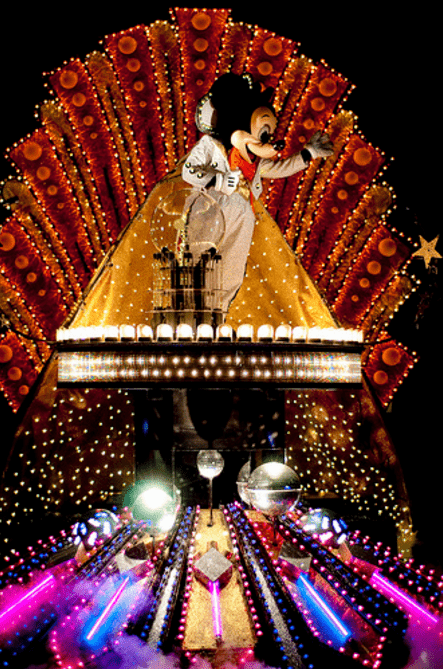 5) SpectroMagic, Magic Kingdom (1991-1999) This 20-minute long nighttime spectacular captivated Guests at Magic Kingdom during the 1990s. It was a parade, similar to the Main Street Electrical Parade. It made use of 29 floats and 7 “whirly” units, for a total of 36 different floats. It also used over 100 miles of fiber optic strands, sound effects and a musical score. Jiminy Cricket himself welcomed Guests to the parade each night with these words: “Welcome to the splendor, the spectacle, the sparkling sensation, where the romance, the comedy and thrill of Disney fantasies comes to electric life! And now, the Magic Kingdom proudly presents, in a million points of musical light, the magical world of SpectroMagic!” Peter Pan, Pinocchio, Snow White and the Seven Dwarfs, Cinderella, Alice in Wonderland, the spinning hippo from Disney’s Fantasia, Ariel and Mickey Mouse himself, among others, all played roles in this nighttime spectacular. There were also “SpectroMen” on whirly balls that “rolled” around along the parade route between floats. SpectroMagic ended in 1999 and was replaced by the Main Street Electrical Parade, which had held the spot of nighttime spectacular at Magic Kingdom in the years preceding the debut of SpectroMagic. (Photo credit: Pinterest)