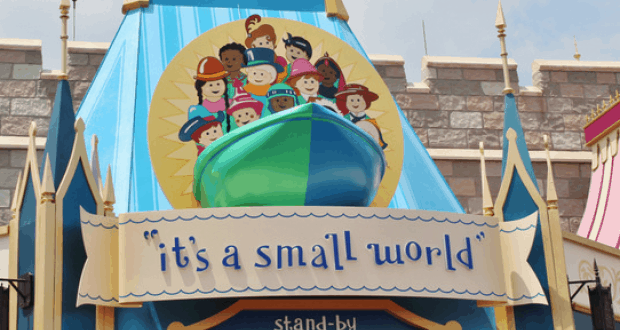 Not only is this attraction one of the classics; it’s also one of the most iconic of all the attractions at Walt Disney World, and it hasn’t changed over the years. Whether you’ve ridden it one time or 20 times, the catchy song lyrics stick in your mind—you can probably hear them now; “It’s a world of laughter, a world of tears; it’s a world of hope and a world of fears; There’s so much that we share that it’s time we’re aware/It’s a small world after all.” The lyrics by the Sherman Brothers and the ride experience itself are parts of many of the childhood memories of Disney World fans. It’s a simple ride, really. Guests board a small boat and set off on a whimsical tour of the whole wide world! There are hundreds of brilliantly colored sets made of paper-mache’, glitter and fabric, as well as over 300 children dressed in clothing and costumes from countries from each of the seven continents. The premise is simple—no backstory, no elaborate tale to the ride; it’s simply an attraction that celebrates the diversity of colors, costuming, cultures and cuisine of all the world’s countries—while celebrating the sameness in humanity as well. You’ll be singing, “It’s a small world after all…” the rest of the day! (That’s in part because the iconic tune plays over 1,100 times each and every day at Magic Kingdom!)