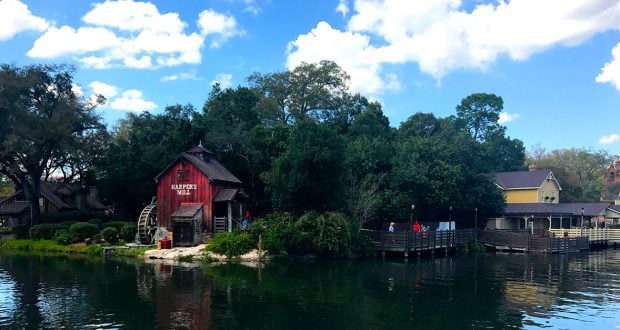 It’s hard to know where to begin at Walt Disney World – there are so many parks, and attractions within each park, that there’s simply no way you could see and do everything WDW has to offer in one vacation.  It’s easy to gravitate towards the flashy, popular rides (Slinky Dog Dash, Star Wars: Rise of the Resistance, Seven Dwarfs Mine Train, Expedition Everest, Avatar Flight of Passage…) and spend your valuable time on them.  But there are plenty of other, lesser-known attractions that also deserve your attention, and we’re here to bring them to light!  Here are our 10 favorite attractions that are often overlooked by Walt Disney World newbies.

The Magic Kingdom’s PeopleMover enjoys somewhat of a cult status among Disney fans, but it’s still fairly unknown among the average park goer.  It’s an elevated magnetized train that travels around Tomorrowland, rewarding you with spectacular views and the chance to ride the rails right through Space Mountain.  The PeopleMover hardly ever has a line, and it’s just a great way to get off your feet for 10 minutes to enjoy the park sights from above. Instead of trying to find the perfect selfie shot of the Tree of Life from a distance, why not walk right up to it?  Discovery Island Trails in Disney’s Animal Kingdom takes you down beautiful (and beautifully secluded) paths to the base of the tree. You’ll be able to take your time exploring the hundreds of animal creations on the tree, and even get close enough to touch it!

While you’re exploring the Tree of Life, take the opportunity to go a step further – right into the tree itself.  Here, you’ll find It’s Tough to be a Bug!, a 3D show featuring characters from A Bug’s Life.  You’ll wear 3D “bug eyes” to watch the show, and you’ll get a glimpse of what it’s like to be an insect.  The theatre is air-conditioned, the show is great fun for the whole family, and there are some surprise 4D effects that in themselves make this attraction worth a visit. Walt Disney World’s World Showcase is not only our favorite location within Epcot – it’s one of our favorite spots on property.  This side of the park is short on rides, and you may not even have heard of Gran Fiesta Tour Starring the Three Caballeros, a musical dark boat ride inside the pyramid in the Mexico pavilion.  If you love It’s a Small World, you’ll love this!  It’s a fun and humorous tour of Mexico, and it’s a great way to relax on a long day at Epcot.  It also provides goofy fun for kids, in the form of the Three Caballeros.

If you’ve been to Walt Disney World’s Magic Kingdom before and have never set foot in the Swiss Family Treehouse, we’re not surprised – but we do think you’re missing out!  This lesser known attraction is a fantastic larger-than-life version of the Robinsons’ famous treehouse.  You’ll climb through the treetops to explore the inventive, open air rooms of the treehouse, complete with 19th-century touches from the shipwreck and an ingenious water wheel that carries water to the rooms of the house.  To top it all off, at the top of the treehouse you’ll enjoy panoramic views of the Magic Kingdom. 5. Living with the Land

If you’ve ever wondered where the food you eat in Epcot comes from, you need to ride Living with the Land.  A leisurely boat ride that focuses on the idea behind Walt’s original vision of Epcot, Living with the Land is an opportunity to learn all about sustainability at Walt Disney World, plus you’ll cruise right through greenhouses to see exactly where the food you ate for lunch is grown.  We also love that this line hardly ever has much of a line.

With the focus in Hollywood Studios fixed on Toy Story Land and the much-anticipated Star Wars: Galaxy’s Edge, we wouldn’t blame you if you didn’t know Muppet*Vision 3D exists.  But it’s worth seeking out, especially if you’re a Muppet fan!  You’ll walk through a highly entertaining soundstage (make sure you read the signs on the props) to get to the theatre, and then the mayhem will continue as you watch all of your favorite Muppets in a 3D extravaganza.  Keep your eyes peeled for live Muppet appearances and some pretty excellent special effects! It’s often overshadowed by Festival of the Lion King, but Animal Kingdom’s Finding Nemo is our favorite show at Walt Disney World, and it just might become a favorite for your family.  The 40-minute show tells the story of Finding Nemo through original songs and magnificent puppets that you just have to see to believe.  With impressive underwater effects, a heart-warming story, and delightful performances, this is a wonderful way to introduce your youngsters to theatre – Disney-style!

For a completely different Magic Kingdom experience, hop aboard a raft to explore Tom Sawyer Island.  A magical wonderland for the explorer in all of us, Tom Sawyer Island takes you along winding tree-lined paths and along suspension bridges to explore hidden caves, narrow passages and even an old fort.  See America through the eyes of Mark Twain, and take a break from all the lines of the park.

Ok, this isn’t technically an attraction.  But the Walt Disney World Monorail Transportation is one of our favorite ways to get around WDW, and it’s often overlooked by rookies, especially if you’re not staying at a monorail resort.  Not only is the monorail comfortable, cool, and free, with typically short wait times, it also offers unparalleled views of the Magic Kingdom, Epcot, and the Seven Seas Lagoon.  Plus, the monorail allows you to go resort hopping and check out the Grand Floridian Resort and Spa, the Contemporary Resort, and the Polynesian Village Resort – which just might become a vacation highlight.